One of the most exciting and useful innovations to come out of the cloud computing revolution is the hosted desktop. Hosted desktops are challenging the idea that every employee needs a fully loaded PC workstation and upending the traditional IT paradigm. 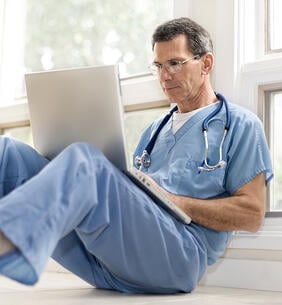 Essentially, a hosted desktop is your desktop as you know it, but hosted in a data center rather than on your local hardware. Thanks to advances in Internet and cloud technology, users can have the same experience they are used to, with a number of added benefits, including lower costs, freedom of location, instant scalability of resources, and increased security.

What is a Hosted Desktop?

The experience of using a hosted desktop is no different than a traditional desktop PC. Imagine your current Windows desktop, either a laptop or PC, with your personal background picture, your shortcuts and icons, all of your applications and documents. Your hosted desktop looks exactly the same, but instead of sitting on the laptop or PC you are using, it is stored in a secure data center. It’s your desktop - but accessible anytime, from anywhere, with any device.

All you need is an Internet connection. Your desktop has been freed. It has all the same functionality but is no longer reliant on a single piece of hardware.

In doing cost comparisons with our clients, C3 has found that over time, hosted desktops are typically 30% cheaper than traditional PCs! All while giving users the convenience of accessing from anywhere, and giving management the added benefits of not needing to manage or update and offering security and scalability. It’s no wonder hosted desktops are replacing the old idea of full desktops for every user all over the world.

You don’t need to waste money on new desktops with the faster processors and high capacity hard drives to keep your business running efficiently. Buying, setting up, and maintaining PCs is costly, requiring an initial high CapEx investment in the hardware, which depreciates over time, and then drains resources with costs of maintenance, upkeep, and power supply as time goes on.

Hosted desktops provide a transparent subscription-per-user model that ensures predictable costs and great value for your money, reducing both your operational and capital costs, and allowing you to move your computing purchases from CapEx (Capital Expenditure) to OpEx (Operating Expense). You can expand your resources to meet your needs quickly, and pay only for what you need.

How Secure Are Hosted Desktops?

Hosted desktops can be more secure than traditional PCs, where your data resides locally and can easily be lost or stolen. Since with hosted desktops, employee data resides in the data center and not on the user’s device, if a device is lost, the data is safe. This also means you don’t need to worry about viruses from local desktops infecting your network.

The way hosted desktops work is that you use your monitor to view the desktop that is running in the cloud, and control it with your keyboard and mouse. 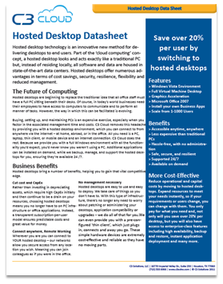 Your hosted desktop is just sending you an image of its activity. Because it is just images being sent over the Internet from the data center to your computer, there is not much data usage (which means it won’t burden your network), and your data is not vulnerable to hackers while in transit. Your data remains secure in your data center.